I see there is an MT190GOA4 and a MT190GOA4TB so what is the difference between these two?  They look the same.

There have been three versions of MT190GO in aluminum and 2 in carbon since it came out in 2015. And other than the “TIPA” award sticker on the new one, they look almost identical.  The specifications have not changed.  They are the same size,weight and capacity.  But if you are looking for parts your are going to fin three versions right now: MT190GOA4TB-1, MT190GOA4TB-2, MT190GOA4.

I’m going to tackle these in order of appearance: MT190GOA4TB-1  was introduced 2015-02-10 and it had a TB and a TD version.  The TB is the black leg release button, the TD is the grey leg release button.  These are the same units, except for that.  The legs are sold as single parts, there is not sub-parts like bushings or twist knobs on this model.

Next in 2016-02-22 was the MT190GOA4TB-2 which is again identical, except that the leg assemblies were given different parts number.  These are the same units, except for that.  The legs are sold as single parts, there is not sub-parts like bushings or twist knobs on this model.

The latest version  MT190GOA4 was introduced 2017-05-15 is almost a completely different tripod.  The size, weight and capacity are identical.  But now, there are individual parts that make up the legs.  This is great!  You can replace the leg shims as they wear.  Now this is where it gets interesting:  The legs are no longer round tubes, they are D shaped.  There is a little flat on the inside of the tube. This makes the tube stronger, and although the tubes are still the same diameter, the twist lock knobs are “chunkier” on the newer unit, making for a better grip.  These twist lock knobs are available in single or three packs as well.  The old twist knobs are not compatible with the new, so you can’t but the knobs and replace them on the old units.  The newer knobs are officially the new M series twist knobs and the engineering is better than before. 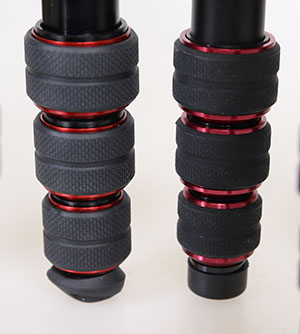 Another difference is the feet.  The new MT190GO use push in rubber feet, while the older MT190GO used a screw in foot.  Not a huge difference, but you can see that it makes for a more stable foot.  The one of the left is the newer tripod and the foot is angled for better grip.

Be aware that these differences also translated into the carbon fiber version MT190GOC4TB and MT190GOC4 as well.  And, as is the case, many of the parts for the aluminum tripods do not fit the carbon tripods.  About the only that that does is the center column and the top and bottom plates of the main castings.  So make sure you know which tripod you have before ordering the parts.

As always, if you need help we are always happy to lend a hand.  Bas is available from 10 am to 2 pm Monday through Friday and we can take you emails and calls.  You can call us at 864-583-6835.  If you would rather not deal with it you can always send it to:

This is the place!

This October 13th and 14th will be our 6th Annual Trade in / Trade up event. That is Friday and Saturday 10am until 3pm both days.

We will have Sales available for demonstrations.

Make money from your old gear.

We will be taking cameras, lenses, tripods and certain other items for trade in.  UsedPhotoPro.com will be paying cash of used and collectable cameras, lenses and flashes.

Manfrotto will be taking old tripods on trade for their new tripods and heads.

Radio Poppers will be trading in for other remote slave units.

Get a Free pro[m]aster battery grip with any camera purchased.

If you cannot attend, but still want to trade in your tripod or head, click here.

Don’t miss out on our in store specials that we cannot advertise here.

This is one of those products that you buy for one need, and find it has a hundred other uses.  The Manfrotto SuperClamp (Avenger also makes a version) is more than just a super robust clamp that will take a MagicArms.  The SuperClamp is a whole system of camera studs and arms that allow you to clamp almost anything to a pole or flat edge up to 3 inches thick.

Because the clamp is cam locked, when you tighten it, it stays tight.  It supports far more weight than you would expect.

As you can see from the picture there are almost dozens of accessories making limitless combinations.

Click Here to see the complete offering on ManfrottoTripodParts.com

This is one of those products that you buy for one need, and find it has a hundred other uses. The Manfrotto SuperClamp (Avenger also makes a version) is more than just a super robust clamp that will take a MagicArms. The SuperClamp is a whole system of camera studs and arms that allow you to clamp almost anything to a pole or flat edge up to 3 inches thick.

Because the clamp is cam locked, when you tighten it, it stays tight. It supports far more weight than you would expect.

As you can see from the picture there are almost dozens of accessories making limitless combinations.

Click Here to see the complete offering of parts on ManfrottoTripodParts.com

The Manfrotto MSCLAMP is an all metal, sturdy, durable, pocket sized, run amok and  go everywhere you want to take a tripod mount for your mobile phone.

From left to right this little guy is almost completely flat, to  a hardy “C” clamp that has a 1/4 inch screw mount for most mobile phones and tripods made now.

There is a shoe on the top so you can add an LED light like a LumieMuse 3, LumieMuse 6 or LumieMuse 8 or a microphone if you need that.

Maximum clamp opening is 3.2 inches or 8.2cm while the minimum opening is 2.3 inches or 5.8cm. Weighs only a couple ounces and it will fit easily in your pocket.  Stylish, matte grey finish with black rubber grips.

Works great with the Pixi Tripods. The Pixi tripod is hand held and table topper tripod.  Use it hand held as a video grip for your mobile phone, or as a table top tripod while you are on your travels.

While there is nothing particularly complicated about the 200PL plate, there are a few things you should know.

This plate shown to the right is the 1/4 inch screw that universally fits most small film and digital cameras ( Click here for size info) while the 3/8 size ( Click here for size info) will fit some medium format film cameras, view cameras and larger telephoto lenses that use the 3/8 screw.  The 200PL is the standard 1/4 screw and includes a 3/8 thread adapter to make it a 3/8 screw.  You can still buy a 3/8 plate if you want the strength and piece of mind of not using an adapter screw. Either way, get a plate for each camera and large lens that will fit a tripod. This way you can use the tripod without having to continuously change plates every time you use a different camera.   The screw is centered on the plate, there is also an anti-rotation pin that can be removed if not needed.  The anti-rotation pin is for video cameras that have a guide hole next to the tripod screw pin the base of the camera.

On the bottom of the plate, embossed into the plate is the word “Lens >” the arrow should be pointing toward the lens on the camera.  This makes sure that the lens is oriented correctly on the head.  This will ensure that the handles and knobs are all within reach for easy use.

While this may seem a small thing, if you are purchasing and using the Architectural plate with 1/4 inch screw ( See left, or Click here for more) this is important. Because the correct orientation when making panoramic shots, or verticals will ensure that the handles on some heads will NOT be in the way.  Some heads cannot be operated because the camera will be in the way if the camera is on the plate wrong. The Architectural plate is also available in a 3/8 inch screw as well.

As you can see to the left the architectural plate has a floating plate with a lip that snugs against the camera so it will not rotate when in the vertical position.

There are replacement screws for the 1/4 Plate or for the  3/8 screw  or you can buy the 3/8 adapter which can be used on this plate as well.  The 3/8 adapter we sell has more threads than may lesser adapters we’ve seen.  This should make the fit stronger and more secure, so the threads in your camera re not stripped or damaged.

As always, we recommend that you zip tie or stow a spare plate inside your camera bag some where, just in case you loose one.  Because your tripod is useless without one.

We have a wide selection of quick releases, adapters and parts and pieces on this accessory webpage.

Save between $40 and $100 on select Manfrotto Video tripods and head combinations.  These kits range from light weight and portable to some of the tallest and stoutest video tripods available.  You can download the for here, or you will receive one with your purchase.  Hurry while supplies are still high and shipping times are fast.  We are expecting massive delivery slowdowns this year as we get closer to Christmas!

The latest and greatest from the stability experts in Italy!

The MXPRO Video Monopods are an update of the line that has been around, seemingly, forever.  So, how do you improve upon a straight stick?  There are Xteen different ways.

I led the local photography club outing last week on the skill and techniques of capturing ghosts.

I was showing how, and the little screen on the Canon 7D just wasn’t going to cut it with a larger group of people, so I borrowed a Manfrotto Digital Director.  Need less to say, I was impressed. 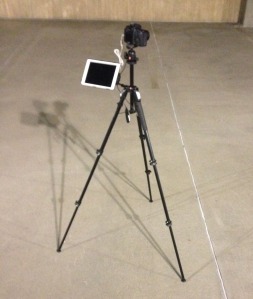 The large firing button and screen made it easier to watch the “subject” and time when I should fire the camera.  The larger button made is easy to just tap and shoot. Exposure was easily changed with the larger controls in the upper right hand side.

When I had to move the tripod, I just grabbed the center column and moved.  The head was on its own ball and the Digital Director has its own arm with a locking joint so both move independantly.

The Digital Director comes in several sizes and shapes. And I found it ver easy to transport and use. 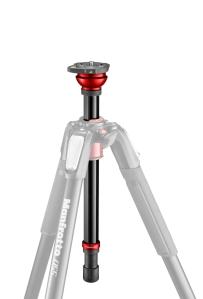 Upgrade your Manfrotto tripod from still camera use to video camera use by simply changing the center column.

The leveler column operates like a standard center column.  Your head attaches normally, it goes up and down.  But the real value is the speed and ease of  leveling the head in just a few seconds.  The knob on the bottom of the column releases the ball on the top of the column.   This knob allows you to quickly loosen, tight lock the top ball or apply a little bit of tension so the ball can move easily with caring amount s of tension.  The bubble level on the top plate will let you level the head in seconds.  This is great for videos, panoramic photos or just quick set ups for portraits, fashion and other still photography.